Has defeating the Somali Pirates at sea succeeded in sending a message ashore?

Re-visiting an article in which I was interviewed following a naval deployment in the Indian Ocean – published in The Times on 20th February 2012 – has lead me to reflect on what has actually changed in the world of Somali piracy since then?

The article was published in the wake of the biggest single defeat the Somalis had suffered against the array of international maritime forces lined up against them in the Gulf of Aden and Indian Ocean. During a short period in January 2012 several Somali Pirate Action Groups were intercepted by warships operating across the breadth of the Indian Ocean. On each occasion, the warships had been alerted to the presence of the pirates by the private maritime armed security teams embarked in the merchant vessels being attacked by the pirates.

In hindsight it is clear that it had taken a long while for those fighting and protecting themselves from the pirates to wise up and realise that military forces and passive BMP 4 measures alone are in-sufficient to stop the Somali pirates hijacking commercial vessels for ransom. The Montecristo incident cited in the article is testament to the fact that BMP 4 and un-armed guards were easy prey for the Somali pirates. It was the use of a good citadel and some cool nerves by the Montecristo Master and his crew that kept them safe until a rescue could be organised. But BMP 4 passive measures were not a deterrent to the Somalis and neither did they slow down their ability to board the vessel by very much.

Ultimately, it was the introduction of armed guards on the merchant vessels that made the difference. It was this that created an environment in which the Somali pirates could no longer safely operate. In January 2012 at least 5 Somali Pirate Action Groups failed to gain captures, or return home. Each one at a cost of at least $25,000 to the Somali investors, and for the Somali pirates themselves, a cost of many years in Seychelles and other jails in the region.

At the time of writing the London Conference was about to take place at Lancaster House. The full communique can be found here. Click.

In most areas that the London Conference focussed, there has undeniably been some progress. Al Shabaab has been beaten back from the gates of Mogadishu, and the Somali Government is slowly taking responsibility for its own security and justice systems.

A second London Conference on 7th May 2013 further reinforced the International Communities determination to set Somali back on the road to viable nationhood, peace and prosperity. For conference outcomes click here.

Specific reference was made to, “The international community expressed its determination to work with Somalia to eradicate piracy and other maritime crimes, and expressed support for the Federal Government’s ongoing efforts to establish internationally recognised Somali waters, as well as partners’ efforts to support the development of Somali maritime security capacities and to bring to justice those behind piracy”.

Sadly, two and a half years on from the 2013 conference we are some way off achieving anything like the level of maritime security envisaged by the International Community. Military Commanders are still publicly making it clear that Somali piracy is suppressed, not eradicated. In private, many foresee the capture of a commercial vessel by Somali pirates in the near to medium term as inevitable given the reduction in the numbers of vessels taking armed security, and the ongoing gradual draw down of military forces.

Meanwhile at a time when the foot soldiers of Somali piracy are being released from jail and sent back to their homes in Somalia, the Somali Indian Ocean coast is once again showing signs of being utterly lawless. The failure by the International Community to isolate and prosecute the pirate investors has allowed them to successfully diversify their businesses and operations, and create a haven for Somali clans to continue operating successfully in the maritime space. Namely “regulating” the fisheries in Somali waters, and by doing so effectively perpetuating illegal fishing, and no doubt other forms of illegal activity.

Right now, the lack of progress ashore developing Somali government judicial institutions and police services means that the Galmudgud coast remains a permissive environment for the hijack and ransom model of piracy the Somalis practiced so successfully up until the spring of 2012. The degree to which Somalis are mixed up in the illegal fishing further compounds the problem. Worryingly so because their expertise and familiarity with the maritime environment will be steadily improving. Thus ensuring they are well placed to step back into piracy, perhaps with a greater all round capability than previously, as soon as the moment is right.

Original article to be found in The Times, click here. 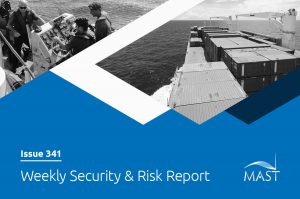