A cargo vessel owned by a Turkish company has been attacked recently by Libyan forces, possibly in international waters, while approaching the Derna Port in Libya. Derna is approximately 150km east of Tobruk and is currently under the control of ISIL militants.

Although the vessel was apparently 13 nautical miles from Derna and in international waters, it seems that the Libyan authorities assumed it was carrying arms into Derna. The ship was subject to artillery fire and two airstrikes, which resulted in the Third Officer being killed.

This is the second vessel to be attacked by the Libyan Authorities in the proximity of Derna. In January 2015 an oil tanker was hit by an airstrike, killing two crew members and injuring another two. It appears that the officially recognised Government in Tobruk will not accept any vessel entering Derna, just in case they are supplying ISIL with munitions.

Whilst Libyan ports are generally open for business, we strongly advise that commercial shipping carry out a security risk assessment of the port and its immediate environs prior to making a port call.

The security situation can change rapidly and for this reason an in depth and up to date intelligence assessment, providing time critical and area specific information, is key to reducing the risk to the vessel and crew when operating in or close to Libya.

Yemen is currently in a period of ceasefire for five days starting on Tuesday 11 May and finishing on Saturday 16 May. This has been called primarily to allow humanitarian aid to enter the country as the people of Yemen are struggling to find fresh water, food, power and medical supplies.

The country appears to be heading for a period of stalemate, where no single entity can gain control. The Saudi led coalition's air strikes continued up to the ceasefire and there has been a lot of fighting in the Saada Province on the border between Yemen and Saudi Arabia.

Visiting Yemeni Ports is possible but there does not seem to be a systematic process for getting clearance from the Coalition forces enforcing the blockade. Be prepared for significant delays and a lot of protracted negotiation before being allowed entry. A risk assessment should be conducted prior to making any entry into Yemen. 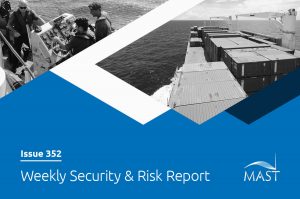