In Maritime news, in the Gulf of Guinea, the Nigerian government has launched a new initiative to combat maritime insecurity. The new Industry Working Group will include shipping stakeholders and assess the effectiveness of the country’s response. NIMASA has announced plans for 24-hour aerial surveillance of oil pipelines, as the country continues to fight illegal oil theft gangs.

In the Indian Ocean Region, Iran has dismissed reports that the UK Royal Navy seized cruise missile engines and surface to air missiles from suspected Iranian vessels earlier this year. The Israeli Defence Minister has warned that Iran is an increasing presence in the Red Sea.

In European waters, a drifting vessel in the Black Sea has been struck by a missile for the second time, while in Ukraine, efforts to export grain continue, although the amount of traffic attempting to use ports on the Danube is causing delays elsewhere. In Europe, a multi-agency police operation has led to the arrest of 39 people smugglers.

In Land news,the security forces in Puntland, Somalia, have been involved in violent clashes with other agencies at Bossaso airport. The Somali government is looking at how it can cut off Al Shabaab’s funding in the country. In Yemen, the truce continues to hold, although there has been sporadic fighting. The Yemen government is negotiating wheat imports with India in an attempt to replace supplies usually sourced from Ukraine.

In the UK, there have been several terrorism-related trials in the past week, while MI5 and the FBI have discussed the difficulties they face in trying to prevent ‘lone wolf’ acts of terror.

In global security, Ukraine remains the main focus, with members of the Ukrainian armed forces now arriving in the UK for training. Negotiations overseen by Turkey between Russia and Ukraine have continued, as all the government in Kyiv continues to look for ways to export its grain stocks, which will increase this month with the 2022 harvest. 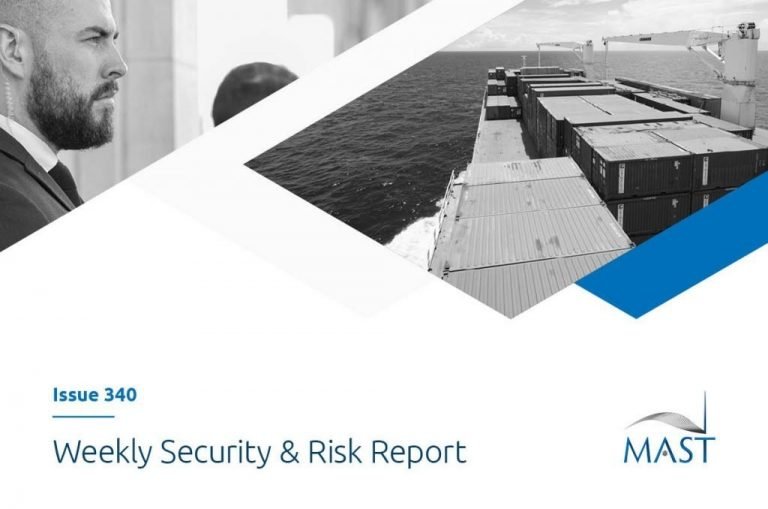 MAST’s weekly security report issue 344 is available to read now. In the Gulf of Guinea, the Brazilian Navy is currently in the Gulf of