At least 19 migrants have died after being deliberately drowned, the UN’s migration agency says.

Many of the drowned were thought to be teenagers originating from Somalia and Ethiopia.
Hundreds of migrants were forced from a boat off the coast of Yemen for the second time in two days.
A spokeswoman for the International Organisation of Migration (IOM) said the incidents “may be the start of a new trend”.
“Smugglers know the situation is dangerous for them and they could be shot at, so they drop them near the shore.”
In a video statement posted on Twitter, William Lacey Swing, the Director General of the IOM said: “The utter disregard for human life by these smugglers, and all human smugglers worldwide, is nothing less than immoral.”

How many are known to have died?

The UN say another 180 people were forced off a boat near the coast of Yemen on Thursday.
On Wednesday the IOM uncovered bodies of 29 of migrants in shallow graves on a beach. They say survivors of the incident had tried to bury them after the smugglers had forced about 120 of them from a boat close to Shabwa, Yemen.
Nineteen are thought to have died in Thursday’s incident and the IOM think as many as 50 could have died in Wednesday’s drowning.
The UN say the migrants were a mix of men and women, and estimated their average age to just be 16.

Why were they travelling to Yemen?

Migrants and refugees have been travelling from the Horn of Africa for decades, because of its proximity and the perception of Yemen as a gateway to other Gulf states and Europe.
But the country is in the midst of a civil war and is facing a dire humanitarian crisis.
In 2016 over 255,000 Somalis fled to Yemen according to the UNHCR.
But thousands have travelled back because of the violence in the country.

How does this fit into the wider migrant crisis?

About 55,000 migrants have left the Horn of Africa to come to Yemen so far in 2017.
The IOM estimates more than half of them were under the age of 18 and a third were thought to be female.
But this is just a portion of the wider migrant crisis as tens of thousands attempt to travel into Europe.
The main route is through Libya, which has been unsettled since the overthrow of Muammar Gaddafi in 2011.
More than 94,000 migrants have crossed the Mediterranean to Italy so far this year, according to the UN. But more than 2,370 people have died trying.
Italy threatened to shut its ports in order to get help in dealing with the tens of thousands of migrants that have arrived this year.
In July, Amnesty International blamed “failing EU policies” for the soaring death toll among refugees and migrants in the Mediterranean.
Source: http://www.bbc.co.uk/ 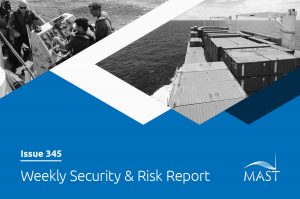 MAST’s weekly security report issue 345 is available to read now. In the Gulf of Guinea, there has been one incident reported in the period

MAST’s weekly security report issue 344 is available to read now. In the Gulf of Guinea, the Brazilian Navy is currently in the Gulf of